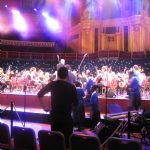 The choir recently travelled to Exeter University for their audition where the judges moved the choir from the Youth section into the Open section after hearing their rendition of Joshua Fit the Battle of Jericho, arranged by Choir Director Karen Gibson and Something Inside (So Strong) arranged by Tina Brooks, music teacher.

The choir was awarded “Choir of the Day” and will now go forward to the national selection where four choirs will be selected to compete at the National finals.

The choir also recently sang at the regional rounds of the Music For Youth Festival and hope to sing at the MFY National Festival in July.

You can next see the choir perform at the Methodist Central Hall at the London Citizens Meeting on April 25th and also at the 100 days of Peace Vigil of Prayer organised by the Diocese of Westminster and the Anglican Diocese of London to be held at St Martin In the Fields, Saturday June 9 2012 to mark the beginning of the Olympic Sacred Truce Season of 100 days of Peace.