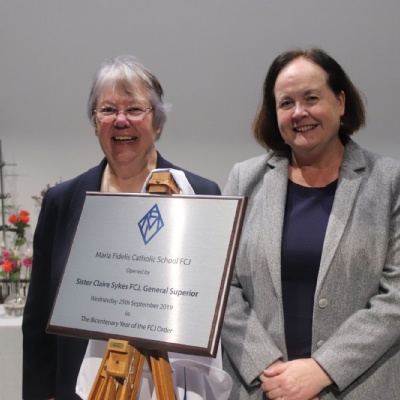 Sr Claire Sykes FCJ, General Superior of the Sisters Faithful Companions of Jesus, officially opened the new school building at a ceremony attended by FCJ sisters, ex-pupils and staff, governors and representatives from the diocese and the local authority.

Mrs Gill thanked all those who had played a part in the new build and paid tribute to the many people who had worked so hard behind the scenes to make a dream school become a reality.  Sr Claire spoke about the need for gentleness in our society and the important role our students can play in creating a more tolerant and inclusive society.

The building was blessed by Jeremy Trood, parish priest of St Aloysius Church.

Head boy, Gabriel Marchant-Parma, and head girl,  Aiseosa Eweka-Okera, gave an impassioned speech about the work they are doing in the Sixth Form FCJ Leadership team to address social justice issues identified as key aims by all  the FCJ in England - divesting all FCJ schools of single use plastic and helping the most vulnerable in our society.